Following their double ski wins on Saturday at the Freedom Paddle, Durban-based surfski stars Hank McGregor and Hayley Nixon won the men’s and women’s singles titles respectively at the Strand on Sunday.

After Saturday’s relatively mild conditions Sunday’s sea off the Strand was completely benign which made the race a slog for the paddlers.

Sunday’s singles race took on a much more competitive nature than the Freedom Paddle, according to men’s winner McGregor. 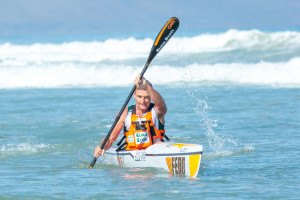 “Saturday’s race was the climax of the weekend with regards to excitement and fun but we arrived at the race on Sunday with a far more serious attitude,” the Euro Steel/Fenn Kayaks’ star said.

“There was zero assistance from the ocean and everything to play for with national selection on the line, but I was really happy to get my title back after Jasper (Mocké) won the national champs for two years in a row.

“Sunday was very different from Saturday in that it was an out-and-out race.

“Saturday we had the pleasure of paddling around Robben Island with Table Mountain in the background but Sunday was hard racing.”

The experienced McGregor managed to get himself the lead on the way back to Strand and he held onto the lead right to the finish to claim another national crown.

Kenny Rice ended in second spot while defending champion Jasper Mocké had to settle for third.

In the ladies race it was world champion Nixon who came out on top following an uncompromising race against a strong ladies field. It was a difficult race for those that hadn’t paddled there before and Nixon managed the challenges the best.

“Wow, it was really, really tough day out there on Sunday,” the Euro Steel/Carbonology star said. “There were just so many challenges, a new course, a new area that I have never paddled in, an interesting triangular out-and-back course and super flat conditions.”

Racing two days in a row for national titles was going to be tough and Saturday’s racing made Sunday’s race that much more difficult.

“Saturday’s race was by no means a chilled paddle and it took it out of me so I got to the start and was quite sore and conscious of the fact that it was going to take a lot to have a good race in my single.”

The ladies race was an interesting one with Nixon and Bianca Beavitt getting away early but they were hunted down by Nikki Birkett and the trio had a dice for the line over the last twelve kilometres. 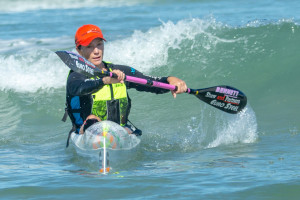 “In the final run-in it became a bit of a mind-game,” Nixon mentioned. “I tried to be as conservative as possible but Bianca pushed really hard and Nikki went with her.

“For a large portion of that final twelve kays I was behind the other girls but I went back to my training and thought that if I could be consistent I should be able to catch them and pass them.

“I think I got passed the other girls with about four kays to go and it was the best I had felt since we turned for home.”

Nixon was ecstatic that she could back up her Saturday performance with a strong win on Sunday against a good field.

“It was such an honour to win the double against a women’s field that keeps on getting stronger and stronger.”

In the age group tussles, Josh Fenn and Sabina Lawrie took home the Under 23 crowns while Uli Hart and Zara Wood won the junior national titles.

More information can be found at www.canoesa.org.za