Pre-race favourites Hank McGregor and Andy Birkett took full advantage of sublime conditions to race away with the overall title at the Freedom Paddle around Robben Island on Saturday morning, while Hayley Nixon won her second title as she and partner Michelle Burn wrapped up the women’s title.

A record field took off from the Oceana Powerboat Club at the V&A Waterfront in clear, calm conditions, with very little swell or wind on offer to assist the experienced surfski exponents. That played right into the hands of McGregor and Birkett, both marathon world champions.

“We got to the front early on and started to push the pace, but it was a real scrap because the condiitons were pretty passive,” said McGregor.

Within minutes the race for the lead was down to a two-boat affair, with the Durban Euro Steel/Fenn Kayaks crew and the defending champions Jasper Mocké and Nick Notten.

“We slowly managed to open up the gap as we approached Robben Island,” described McGregor. “That allowed us to take a pretty conservative wide line around the reefs as we turned at the island.

“Jasper (Mocké) and Nick (Notten) took a riskier, faster line on the inside, but we were happy to see that we have our lead intact and we put our heads down on the return leg and just kept opening up that lead.

They crossed the line at the Watefront to an heroes’ welcome, winning by more than two minutes from Mocké and Notten, with fellow Capetonians Stu MacLaren and Kenny Rice securing the last step on the podium ahead of Dawid Mocké and young rising star Josh Fenn and Barry Lewin and Bevan Manson rounding out the top five. 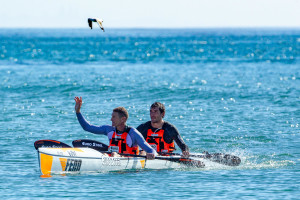 McGregor said that this was the first time that he had paddled with Birkett since winning the SA S2 title at the Pete Marlin race last year.

“It was great to be able to just jump into the boat with Andy and to get back to what we are good at,” said McGregor.

The pair had been uncertain about who would ‘drive’ the boat from the front cockpit, but that was amicably settled.

The women’s race produced more drama, after Nixon and Burn seemed to have made a solid start to race away from the other elite women’s crews on the outward bound leg.

“It was a bit like marathon racing tactics to be honest,” said Nixon (ShawAndPartners/Euro Steel/Carbonology). “We found ourselves on our own and we were pretty sure were were leading.

“As we turned at the island we suddenly saw Bianca Beavitt and Melanie van Niekerk sneaking up on our inside, and we had to put our ears back,” she explained.

“It was pure local knowledge and it did give us a bit of a fright. I know how good Bianca (Beavitt) is in these conditions from the Cape Point Challenge, so we took off and pretty much time-trialled it for the last ten kilometres to the finish,” said Nixon. 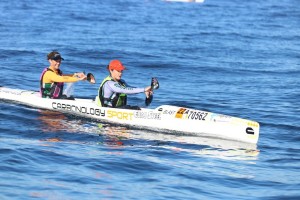 “It was ours to lose and once we had lined up on Devils Peak, we managed to stay well clear of the other female boats,” she added.

In fact Beavitt and Van Niekerk may have burnt too many matches trying to catch up to Nixon and Burn at Robben Island because they were hunted down from behind by Sabina Lawrie and Olympic medallist Bridgitte Hartley, conceding the CSA silver medals on the return leg.

For the 350 paddlers who took part in the being conditions, the paddle around the island where Nelson Mandela was imprisoned had a great deal of significance.

“We were in a bunch with a few male crews as we went around Robben Island,” said Nixon. “I had absolute goosbumps, and said to everyone ‘Happy Freedom Day’, and then added. ‘Imagine spending 28 years of your life there’. None of us will ever forget that feeling.”

Red Bull’s Dusi star Sbonelo Khwela added his enthusiasm to the upbeat mood of the Freedom Day celebrations as he completed the circumnavigation of Robben Island with local Crispin Thompson.