Wessels returns to the top of SA waveski 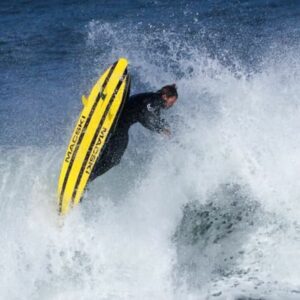 Mike Wessels retained his title as the national waveski champion at the end of a thrilling South African Waveski Championships on the Eastern Cape Sunshine Coast, while Bruce Viaene rocked the contest with two nine point waves en route to claiming the senior title.

The start of the National Championships coincided with a large storm that brought in massive and messy surf. The first rounds of the contest featuring the Age (Closed) Divisions, Open Ladies and Novice’s took to the water in these challenging conditions at Kelly’s Beach – a secondary contest venue. The wipe-outs were aplenty but that just encouraged everyone to push their limits and post high scores.

The second day of the competition saw much cleaner waves run down the line-up, at the main break. The Open Men’s kicked off the morning in five to six foot surf conditions. In round one Mike Wessels (WP), Johann Momberg (EP), Bruce Viaene (EP), Eugene O’Neil (EP), Francois Steyn (WP), and Malan Calitz (WP) won their respective heats in hopes of clinching the coveted title of SA Open Champion.

As the day progressed, the conditions deteriorated, and by Round Four, only sixteen riders were left in the Open. The next day would determine who would be crowned champion.

By finals day, the swell size had dropped to two to three feet but still offered high scoring potential, as spectators and fellow waveskiers watched the drama unfold as the contest concluded on Saturday afternoon.

The Open Novice was won by KwaZulu-Natal’s Kai Williams, who surfed way above his ability to put together a total heat score of 13.93 out of a possible 20 points. Shortly after, Williams went on to win his age group, Cadets (10-16 yrs), with another dominant performance.

The Ladies Open final was won by Sandra Pienaar (EP) who is no stranger to the podium. Pienaar has represented South Africa several times and showed her prowess once again. The Legends (60-64 yrs) was won by Tony Dubber (Border) who posted high scores with his effortless style.

The contest took on a serious tone as the Master’s Division (40-49 yrs) entered the water. This is a highly competitive age division with many top riders being represented. Malan Calitz (WP) held an early heat lead and beat his fellow teammate, Mike Wessels, by a mere 0.31 points. The Grand Master’s (50-59 years) was won by Morne de Villiers (WP) who has made an incredible comeback to the sport. 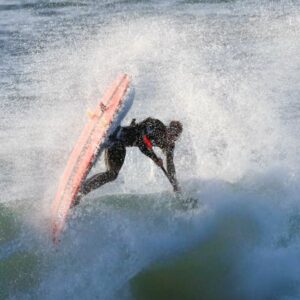 The Senior’s (30-39 yrs) final was the highlight of the day for many spectators. Eastern Province’s Bruce Viaene showed pure class by posting the highest wave and heat total of the entire contest. Viaene scored a 9.00 and 9.43, snagging him his third Senior Title and giving him the confidence needed for the World Waveski Championships later this year.

Utmost respect must go to the Grand Legends (65yrs+) for surfing harder than others. Ronnie Ackerman (EP) won the title in epic fashion with his radical surfing which he is world-renowned for.

Finally, all eyes were on the water as South Africa’s top four Open Men entered the water for the SA Open Final. Francois Steyn (WP), Mike Wessels (WP), Malan Calitz (WP), and Bruce Viaene (EP) paddled out for a battle royale. Viaene took an early lead on the opening waves but was soon on the backfoot as 2019 champion, Mike Wessels put a second great wave together.

Calitz answered back with his own score, putting pressure on Wessels who was keeping just ahead of the pack. A costly mistake by Calitz led to an “interference call” against him for accidentally dropping in on Steyn which resulted in Calitz being penalized into fourth place. As the time ran out, Mike Wessels claimed his second SA Open title, a feat that hasn’t been done in decades. Steyn picked up second place, followed by Viaene in third.

“It feels good to win back-to-back titles although I wouldn’t have felt bad if I’d lost because the level of surfing was of such a high standard.” shares the 2019 and 2022 South African Open Champion, Mike Wessels.

This event is the crown jewel on the waveski calendar and with it unable to run since 2019, the “Waveski Family” were eager to come together again to test their skills amongst the country’s best.

“It was an absolute honour to have Port Alfred as our host town this year, shares Eastern Province Waveski Surfing Association Chairman, Eugene o’ Neil. EPWSA has seen a massive resurgence recently and their results during the contest and their ability to host a successful event are testimony to that.

The rest of the year has provincial contests taking place in KwaZulu-Natal and Western Province, with the 2022 World Waveski Championships taking place at Venture, California in November.

More details can be found at www.canoesa.org.za