Two of the trio of South African teenagers that took part in the Youth Olympic Games qualifying event emerged from the tough outing in Barcelona as the top placed paddlers in Africa, with all three savouring the intensity of their first taste of international competition.

The two events were designed to give paddlers a completely different experience from the traditional paddling disciplines with competitors taking part in the head-to-head sprint and the flat-water obstacle slalom. 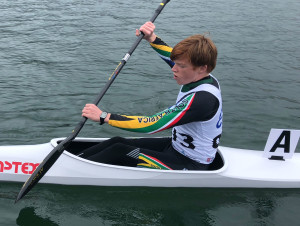 For all three paddlers it was their first taste of international competition which provided them with the chance to see how strong their international counterparts are and they could all agree that the standard was incredibly high.

“It was a real eye opener for me to see how competitive the other girls were,” Lizzie Conradie said after the event.

“It was such an incredible experience and it has shown me how much harder I have to work to compete and all the extra strength work and gym work that I need to do to get to that next level.

“With this knowledge it has given me even more motivation to do well if go to Argentina later in the year.

“I am happy that I now know what to expect for the next event because I was hoping to do better but I know the standard and I am going to work to get there,” she added.

Van der Westhuyzen is also on the cusp of qualifying for the Youth Olympic Games and echoes the sentiments of his team mate when talking about how high the standard of competition was. 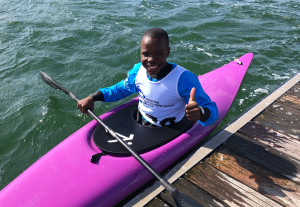 “The racing was extremely competitive and it was a bit of a shock to see just how high the standard is, but with that said it has given me a mark to work towards for later in the year.

“The slalom was a lot more competitive than the sprint and the guys are really strong so I just made sure that I managed to get my eskimo roll done and finish the course,” he explained.

Unfortunately for Mzolo, his competition ended in disqualification in the slalom event however he finished just outside the top 50 in the sprint event and enjoyed his first taste of international competition.

“I am happy that I have started competing internationally but unfortunately my results weren’t as good as I was hoping.

“I am determined to train a lot harder so that I can keep improving and compete again internationally soon,” a focused Mzolo commented.