Coetzee made the dramatic jump to the 1000m K1 in order to try and qualify for the Olympic Games in Tokyo later this year and despite not qualifying, he was more than happy with his efforts in a race that he’s still coming to terms with.

“It’s been a really good week here in Barnaul and of course my main focus was the 1000m,” Coetzee said.

“With my limited 1000 metre racing experience I managed to pull off a good heat and a really good semi-final and just missed out on the final.

“I had a strong semi-final and my time would have placed me second in the other semi-final so I am happy with that performance. 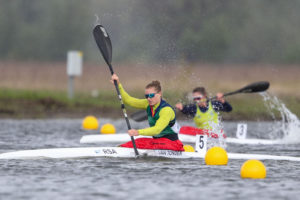 “Even though I didn’t qualify for the final I felt that I improved on my previous 1000 metre races.”

Olivier was unable to gain that final spot into the Olympic Games earlier this week and despite that result her silver medal gives her a significant boost going forward.

“It is an amazing feeling to finally reach the podium, and to have done it in an Olympic discipline after the major disappointment of Friday,” Olivier said.

“It is bitter sweet on one end, thinking of what could have been if this were the final I could have raced on Friday, but to think like that and to live in the past will only hinder the gains I can take from this experience.”

For Coetzee, he sees this result as an important step forward in his career as well as a tribute to the hard work he has put in over the last year.

“(This result) just shows me that everything didn’t go to waste in the Covid-19 year because I was on the World Cup podium in 2019 as well and then I managed to get back on the podium one year later and improved from bronze to silver.

“It’s now time to get home and relax for a bit before we start preparing for the next period of racing.”

Following her performance in Siberia, Olivier’s focus is now moving to later in the year where she will be back on the international stage.

“Qualification for Paris Olympics is little more than two years away and with continental qualification open as well really provides a light at the end of a very long tunnel.

“The next focus will be World Championships in September where the level will once again increase.”

For President of Canoeing South Africa Kim Pople, these results show the resilience of our paddlers who showed their true colours in bouncing back.

“Canoeing South Africa is incredibly proud of Esti and Chrisjan after the disappointment of not qualifying for the Olympic Games,” Pople said.

“We are now looking forward to Duisburg 2023 which is the qualifier for Paris 2024 and try and get the younger paddlers to look up to Esti and Chrisjan’s performances this week.

“We want them to enjoy the moment and travel safely back to South Africa from Russia.”