Durban – The global surfski community is heaping praise on Durban paddler Quinton Rutherford who set a new Guinness world record on Friday for the greatest distance covered in a 24 hour period by a solo ski paddler, putting into context how physically and mentally demanding the successful record bid was.

The fifty year old father of three set out to better the previous mark of 214 kilometres set by New Zealander Tim Taylor in 2015, and was shadowed by a team of officials from the Guinness Book of World Records to verify his paddle that started before dawn at Cape Vidal setting off south for Durban.

Key to his chances were advantageous weather conditions and Rutherford’s effort was staged with a strong Easterly wind blowing offering him downwind conditions, but few could have anticipated how physically demanding the task would be in the huge six metre high swells.

The entire paddle was a painful one for Rutherford, who suffers from the debilitating pain of sciatica, or the pinching of the sciatic nerve when sitting in his ski.

“I was hanging in from hour one!” he said. “I was in permanent pain and actually as the seas got bigger and I was getting onto longer and bigger runs, I could at least stretch my legs to ease the pain, sometimes pulling my legs up to me chest.

It was pain of another sort that nearly derailed his bid altogether.

“After my 160 kilometre training paddle I picked up bad tendonitis. It was squeaking and painful and I thought I would have to call it off. Then one morning I was working on the tendon and it just clicked and released and the pain was gone!

“The Easterly was there and I went straight to my phone to notify the Guinness people that I was going, on Friday the thirteenth!” he said. 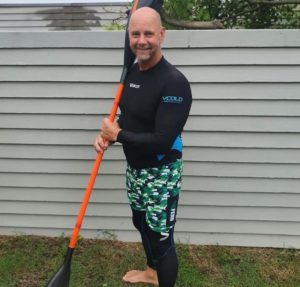 With the global surfski community following his paddle via updates posted by the gutsy support crew braving the big seas on their inflatable, Rutherford went past the target 215 kilometres distance as they neared Ballito, and his paddle ended earlier than planned in a combination of raw emotion and exhaustion off Thompsons Bay.

He stopped to set off a flare opposite the family home of his former doubles partner and good friend Mark Perrow, who was killed in a light plane crash last year, as the record-breaking attempt was always going to be a tribute to his friend on what would have been his 55th birthday.

“It was my way of saying goodbye to Mark,” said Rutherford.

It proved to be the end of this record-breaking paddle, and he was unable to keep paddling as fatigue and the emotion of the milestone reaching Perrow’s family home ended his solo effort at 227 kilometres, and he came inshore on the NSRI Inflatable to be welcomed by his emotional family members.

“I just couldn’t carry on,” said Rutherford. “I was broken, totally broken.

“My daughter came out on a charter boat to meet me somewhere off Tinley Manor to encourage me, which really lifted me. But I knew then that my tank was empty.

“After I set off the flare at the Perrow’s house I fell out of my ski twice and I couldn’t even crawl onto the back of my ski. Then I knew I was done and was hauled onto the the escort boat and taken in.

“Hank (McGregor) was telling me to carry on because everyone was waiting for me in Durban. But that was me done.

“The fact that I call it quits at the Perrow’s house, on Mark’s birthday, sweetened the story,” he added.

“I have been overwhelmed by the interest and support from all over the world,” he added. “I needed to raise around R250 000 to make it happen and the generosity from lots of people like Spilltech, Fenn and Engen has been humbling.

“That was a proper machine effort,” said multiple marathon world champion Hank McGregor, who paddled out in the darkness on Friday night with friend Lee Furby to join Rutherford as he neared Durban.

“The conditions were unbelievably tough with that East blowing,” explained McGregor. “The swell was huge and it was pitch dark. We struggled to find him! Luckily the NSRI Boat had some lights on board which allowed us to locate him.

“If you focused on the lights on the shore you just got nauseous, but if you looked the other way, it was so dark you couldn’t see the swell coming in. You just got these slaps across the face the whole time from the waves coming out of the pitch black night.

“His stabilising muscles were way overused. I will never forget watching those waves breaking over him in the complete darkness,” he added.

“I take my hat off to the guy, this was a super-human achievement” said McGregor, who was part of the year-long planning process with Rutherford’s for the record-breaking paddle.

“It is an absolutely unbelievable achievement because it was so uncontrollable,” said Durban surfski ace Hayley Nixon.

“The fact that he was brave enough to take on those conditions in the dark is simply amazing. It will give people a lot of faith in what they are capable of doing,” she added.

“It is a staggering achievement and one that we can all take heart from,” said Canoeing South Africa’s president Kim Pople. “By his own admission Quinton is an average paddler, but to break the world record in tough conditions like that is all about courage and perseverance.

“At the end of a year that has been so demanding on all of us, to follow Quinton’s bid to break this record, and to be able to share in his incredible paddle, thanks to the heroics of his support crew, and all the paddlers who went out to support him along way, was inspiring,” she added.