Nixon does the double and world champs prevail in East London 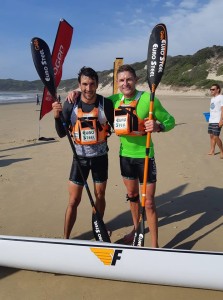 Euro Steel team mates Birkett and McGregor were made to work for their title – Birkett’s first SA surfski title, a matter of weeks after he won the SA K1 River title at the Hansa Fish –  by the crews of Stu MacLaren and Kenny Rice and the paring of Jasper Mocké and Nicky Notten.

“It was close the whole way,” said Birkett. “We managed to get a lead of less than a hundred metres but the other two boats were right there every time I looked over my shoulder.”

The pair ground away, enjoying the excellent downwind conditions with strong 24 knot North Westerly  winds and a three metre swell over the same course from Glen Eden to Nahoon beach that was used for the single ski race on Saturday.

“It was such fun, and fast,” said Birkett, who added that it was easy for the pair to get their partnership going after their success at the world marathon champs in Portugal in September.

“Actually we haven’t paddled together since the worlds,” admitted Birkett. “It is one of those special combinations where we can just jump in a boat and go.”

Their race included a detour to investigate two whales as they approached the Three Sisters reef, close to the finish.

“That was the best! We were excited to see the whale and her calf and went off course to have a closer look,” said Birkett.

Rice and MacLaren took the silver medal while singles winner Jasper Mocké added the bronze to his collection with Nick Notten. 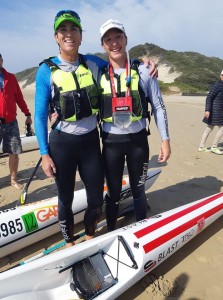 In the women’s race reigning world champ Hayley Nixon completed the double by adding the S2 title to her national singles title she won the day before when she and Knysna local Chloë Bunnett teamed up to win the women’s title.

“It was a very different ballgame to yesterday in terms of the sea conditions, but we had so much fun,” said Nixon.

“We had a new Carbonology ski and for a first outing together Chloë and I went really well. She called the shots front the back seat and provided the power, because we were under pressure the whole time from Jenna Ward and Nikki Birkett.

“We went wide the Three Sisters reef and they took the chance going inside on the tiger line, keeping the pressure on us,” she said.

Jenna Ward and Nicky Birkett finished second with Bridgitte Hartley and Sharon Armstrong making up the rest of the women’s podium.