Hank McGregor evened the scores with Andy Birkett on the final day of the SA Flatwater Marathon Canoeing Championships held at Camps Drift when he and his partner Jasper Mocké prevailed to win the men’s K2 title in a tense end sprint with Birkett and Jean van der Westhuyzen.

In a thrilling climax to the two days of marathon racing, the men’s title decider was a fitting and exciting end to the competition as the race whittled down to four boats turning together for the finish line at the end of the 30km, eight lap race.

While Brandon van der Walt and Clint Cook brought up the back of the bunch, Cape racers Stu Maclaren and Kenny Rice Challenged valiantly, but in the end the overall title was decided by the sheer consistent power of McGregor and Mocké.

The Euro Steel pair got better and better as the race progressed. “This was the first time we jumped in a boat together since (last year’s world championships in) Brandenberg,” said McGregor.

“It was cat and mouse all the way to the finish. We managed to find our rhythm as the day went along, and were trying out new things to try and better ourselves,” he added.

“We tried to drop guys to get it down to two boats but everyone was just hanging in,” said Mocké.

“We never get complacent. We are always looking to try new things. We were using new paddles today. The guys at the top are always trying new things so you have to keep evolving,” he added.

What started as a highly competitive six boat front bunch was reduced to four as both Czech racer Jakub Adam and Bryan le Roux, and the Cape crew of Mark Keeling and Nick Notten were sidelined by losing the understern rudders on their boats.

The women’s race was underscored by drama throughout. Jenna Ward and Nikki Russell looked to have fallen off the front trio of boats and out of contention before they started a grim-faced fightback in the second half of the race.

Technical issues with Hayley Nixon and Michelle Burns rudder saw them fall right back, and at one stage the crew of Bridgitte Hartley and Kyeta Purchase put their paddles down and looked to have surrendered their contest, resulting in a constant reshuffling of the leaderboard.

Ward and Russell kept their composure and ground back to the front, taking full advantage of the series of incidents and drama, and went on to win the title and complete a fairy tale comeback win.

“I know that Nikki and I have strong minds and that is what we needed,” said Ward afterwards. 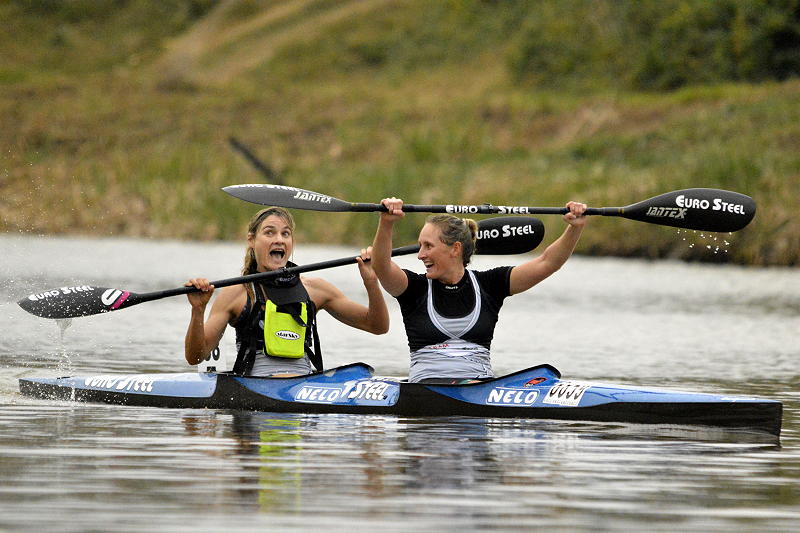 “We knew we had to grind so we just had to put our heads down to catch them, and that’s what we did,” she added.

“I think everyone was out to get us so we just tried to play it safe most of the time. We are really happy to have pulled off a race like that in the end,” she  said.

Behind them Nixon and Burn were locked in a tense tussle with Bridgitte Hartley and Kyeta Purchase for the silver medal, and importantly, the last place in the SA Team to the World Championships next month.

The two craft collided at the take-out for the last portage, resulting in Nixon and Burn capsizing. Hartley and Purchase duly took second place, but the crowd had to wait more than an hour as a protest was lodged and then a counter appeal was heard. In the end the race jury decided that the race result should stand.

In the Junior races, the hotly fancied crew of Alex Masina and Stuart Little was another casualty of understern rudder damage, leaving the door open for Callam Davis and Hamish Lovemore  to take the gold, making up for Davis’ disappointment from Saturday, with the never-say-die Under 16 crew of David Evans and Hamish Mackenzie finishing second and booking their berth in the national boys team.

In the junior girls race there was a carbon copy result as the clear favourites Christie Mackenzie and Sabina Lawrie took the gold, but had to work hard to down the challenge from her cousin Caitlin Mackenzie and fellow Epworth Under 16 paddler Amy Peckett.