Hamish Lovemore became the Under 23 marathon world champion as South African junior and Under 23 paddlers grabbed four medals at the ICF Canoe Marathon World Championships on Friday, as Lovemore won his gold and Uli Hart finished third in the men’s Under 23  K1 race, Saskia and Valmajean Hockly won the junior K2 silver and Christie Mackenzie added the Women’s Under 23 K1 bronze.

Lovemore and Hart were central to a six boat break that seized control of the race by lap four of the 23 kiloemtre, seven-lap contest, carefully managing the pace and rotating places on the side slip waves.

It turned into a dice to the line with Lovemore and Hart flanking Dane Philip Knudsen. Lovemore showed once again that he could shade the Dane for top end speed and came past him in the final two hundred metres to claim the world title.

“I am so happy! I felt all the pressure on my shoulders this morning, but to have the race done and have it go my way after so many years of trying, I couldn’t be happier” said Lovemore at the finish.

“I have spent long months in Europe training, first in Denmark and then here on the course with José Ramalho and Fernando Pimenta.”

In the ferocious final lap Lovemore led through the final portage, and then had to keep his nerve for the end sprint.

“I ran that last portage hard but I wanted to be first at the put in.” he explained. “I let Philip (Knudsen) take up the pull and just backed myself for the end sprint.”

Hart, who was a tenacious and instrumental paddler in the front bunch throughout settled for third, repeating his bronze medal feat at last year’s worlds in Romania. 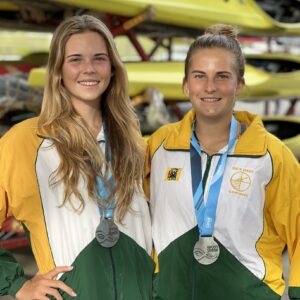 The Hockly siblings sensationally opened the second days racing by grabbing the silver medal for South Africa in the junior women’s K2 race.

The Danville Park High pupils from Durban raced toe-to-toe with the Hungarians Hanna Jozsa and Kinga Molnar who eventually won the gold medal.

“It really is something to be proud of,” added Saskia Hockly. “Not many people can say they raced with their sister and podiumed.”

The Hockly sister stuck to their gameplan for the event, even when they found themselves under pressure right from the start.

“We had three main goals,” said Valmajean Hockly. “To get onto the front bunch, to not mess up the first portage and then see if we can get into the podium.”

“We really had to put our heads down to catch up to the Hungarians at the start, but once we did catch up they slowed the pace right down.

“They didn’t make us pull for three laps, which was very chilled,” she added. “We were able to get our heart rates down,” said Valmajean Hockly.

The double is remarkable for Saskia Hockly as it repeats her feat in Romania last year where she grabbed a junior K1 bronze medal and a senior women’s K2 bronze medal with Jenna Nisbet.

The medal was special for the sisters as they recognise how difficult it can be for siblings to get along under pressure.

“Sisters can fight when they are training or racing in a boat together, but luckily for us we got along really nicely today and got the result,” said Valmajean Hockly.

The other South African crew in the junior K2 women’s race Neriyah Dill and Holly Smith excelled by finishing ninth after capsizing earlier in the race, and they were thrilled with a top ten finish against a very competitive field. 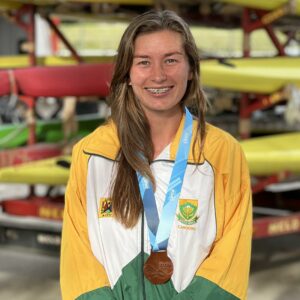 Christie Mackenzie raced onto the podium in the fast-paced women’s Under 23 K1 race, won in a solo break by Swede Melina Andersson.

“It looked like I didn’t have a great start but I actually executed the start the way I wanted to,

“I drew a lot of inspiration from the junior girls K2 race this morning and the way they came back from the start,” said Mackenzie.

“The last portage didn’t go my way, but I am really happy with what I have been able to do,” said Mackenzie.