Hartley was able to cruise to the finish line unchallenged after she had shaken off the challenge from Jenna Ward on the last portage, while Birkett needed something special to prevail in a ferocious four-boat duel in the final end-sprint. 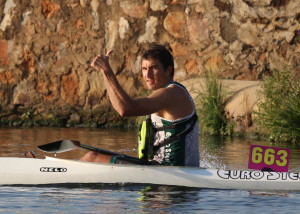 Eleven times world champion Hank McGregor looked to have taken control of the bunch as they rounded the last set of turn cans, but Birkett, with Clinton Cook nudging the tail of his kayak in the final turn, somehow edged McGregor off the front of the bunch and held him off in a nail-biting race to the finish.

With the race doubling as the trial for the national team to the world championships in China in October where two paddlers are selected, McGregor found himself under real pressure from the on-form Capetonian Nick Notten, who came blazing up on the inside and threatened to provide a major upset.

The wily veteran McGregor had to throw everything into the charge to the line to get the nose of his kayak ahead of the surging Notten to secure the silver medal, and, vitally, the other seat on the plane to China.

Notten ended third, and the valiant Clinton Cook, who was a force to be reckoned with throughout, had to settle for fourth.

“It is always stressful racing SA Champs because there are so many boats in the line and lots of guys have got the speed,” said Birkett.

“It is great just to have made the team. There is a lot of work that needs to be done before the world champs,” he added. 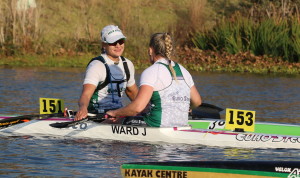 The women’s race started with a far smaller field and quickly became a three boat affair with Hartley, Ward and Andy Birkett’s wife Nikki pulling away. Around halfway Birkett fell off the pace, leaving Hartley and Ward to decide the holders of the gold and silver medals and ring fence the places in the national team.

For the remainder of the race Hartley and Ward raced side-by-side until a sharp move by Hartley coming into the final portage created the daylight she needed between herself and Ward and she scampered away to claim the gold medal.

Earlier Hamish Mackenzie and Dave Evans won a needle race for the Boys Under 18 K2 title that was blunted by the withdrawal of Matt Fenn and Uli Hart who broke the rudder on their kayak on a portage.

In the girls equivalent Amy Peckett partnered Nosipho Mthembu to the gold medal, despite having to come from behind after they battled on the portages. Second was the on-song Under 16 crew of Melonie Croeser and Georgina Howard.

The three day programme of races ends on Monday with the highlight being the men’s and women’s K2 races.