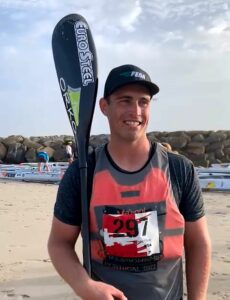 Rice, who finished runner up to his older brother and double world champion Sean Rice at the world championships ín 2019, edged past countryman Hank McGregor, Corey Hill and Mackenzie Hynard in tough mild downwind conditions over the 19,8 kilometre course from Viana do Castelo to Ofir beach in Esposende.

“That was solid race and I left it all on the line,” said an elated Rice at the finish.

“I had a chat with my brother before the start and he said he wished he could have been here, so it is really nice to bring it back home for the Rice family.

“I didn’t ever really know it was mine,” he added. “There was a tight pack and about twelve kays in I thought I would be hunting for a top five.

“As soon as it glassed over I realised that this is what I am good at. I just put my head down and I knew that I had the upper hand when we came back into the river mouth where it is shallow.

“I just kept saying to myself ‘Shut the door! Shot the door!’ so I am really chuffed to do be able to do that,” he said.

“I tried my best but lost it to a fast finishing Kenny Rice in the last two kays,” said McGregor from the finish line after his second surfski world champs silver medal.

Uli Hart raced clear of the Under 23 pack to retain his world crown, with East Londoner Josh Fenn taking the silver medal.

“I had a great start and I was on Danielle Mackenzie’s wave, but as soon as we exited the harbour I decided to go out deep to look for some bumps while the others push off to the left,” said Burn after the race. “I don’t think that was the right call.”

“Then about three kays from the finish I just hit the wall,” she added “I am happy just to hang onto my third place.” 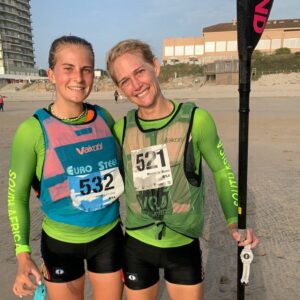 Saskia Hockly stormed home to secure a South African one-two in the junior women’s race with Holly Smith finishing in second. She said that she was torn between staying with the women’s race leaders staying inshore and following Michelle Burn further out to sea.

“I stayed between Danni (McKenzie) and Mich (Burn) the whole way and just held my line,” she explained.

“I stayed calm,” she added. “I saw the Australian coming up after a flying start but I just told myself to stay calm and let the ocean work its magic.”

Kira Bester added a a silver medal to the team haul in the Under 23 women’s race, with Jade Wilson racing well to finish fifth.

Numerous South African veteran and masters age group paddlers raced into the medals in the age categories, racing against a field of over 350 paddlers in total.

Podium contender Jenna Nisbet was forced to withdraw just before the start after testing positive for Covid-19 contracted at the marathon worlds last weekend.