Teenage paddling star Thabo Mahlaba stunned the South African slalom canoeing championships held on the Liebenbergsvlei river outside Bethlehem by winning the senior title in a near flawless display over three rounds.

Mahlaba, who turns 19 next month, was the early pacesetter on the Bohlokong slalom course, with Sandile Makhubo keeping him under constant pressure as the field was reduced to five boats for the final after two round of qualifiers. 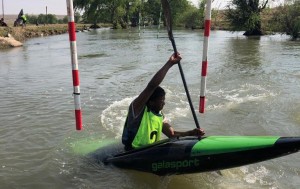 Both were clinical in their execution and they both returned only one penalty for touching a gate in the three rounds they raced on the course on the fast flowing water where speed was more important that rough water technique.

Mahlaba, who is the younger brother of established slalom paddler Success Mahlaba completed his run in the final with a nett three second lead over Makhubo to secure the national crown.

Slalom convenor and former Olympian Cameron McIntosh was excited by the racing on offer and pointed to the emergence of a new generation of slalom stars.

“In addition to Thabo (Mahlaba) being eighteen, Karbello Mokoena who finished third and Tsepo Motaung who was fourth, are Under 16 paddlers,” said McIntosh.

“Even more remarkable is the achievement of eleven year-old Zwelibanzi Zimu, who made it through two rounds of qualifiers to make the top five and earn a place in the final,” he added.