As the cream of South Africa’s surfski paddlers prepare for the 2018 South African Surfski Championships hosted by the Pete Marlin Surfski Race in East London over the first weekend of November, the sports bosses are reflecting on a year that is peppered with exceptional local and international achievements.

At the Maui Jim Molokai Challenge in Hawaii in May the South African contingent hit the headlines as Hank McGregor came second in the men’s title race, Capetonian Jasper Mocké also finished on the men’s podium, and Hayley Nixon stunned the women’s race by winning on her debut outing.

Nixon has been riding the crest of a wave since winning the women’s surfski world title in Hong Kong in 2017.

She starred again at the Investec Mauritius Ocean Classic in June, one of the premier surfski races in the world, where McGregor and Nixon won the men’s and women’s categories respectively and the seasoned Dawid Mocké finished third in the men’s race.

Bridgitte Hartley and Kyeta Purchase completed the South African dominance in the ladies race when they picked up second and third respectively.

The North American leg of the surfski season saw more strong results from South African paddlers with Kenny Rice finishing second in the Canadian Surfski Championships and followed that up with a win at the Gorge Downwind in the United States. 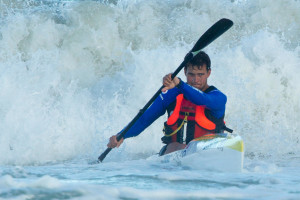 At the Nelo Summer Challenge in Portugal in September, where many of the world’s best surfski, sprint and marathon paddlers are lured by substantial prizemoney, Nixon added the women’s title to her ever-expanding CV, while Sean Rice led home a South African 1-2-3-4 in the men’s race, taking the title from McGregor, Nick Notten and Kenny Rice.

A few weeks later Nixon and Rice were back on the top step of a surfski podium, this time at the inaugural Irish Coast Paddling Championships. Nixon led home two other South African women in the top four as Bridgitte Hartley and Jenna Ward found form in the cold conditions, while the men’s race saw three other South Africans racing into the top seven positions with McGregor in fourth, Jasper Mocké in sixth and Kenny Rice seventh.

At the last world championships South African women took home five medals, including world titles for Nixon and junior Sabina Lawrie, while the senior men filled four of the top five with the best being McGregor’s close second, and Kenny Rice taking the men’s Under 23 world title.

Off the back of these performances, the calibre of the South African champs in East London in a few weeks’ time is going to be of the highest level and the showdown will be a mouth-watering affair.

“The race is shaping to be the most competitive national champs in years with paddlers coming from around South Africa to take part in the junior to master age categories.

“East London is a great venue for the nationals with a perfect 22km course for both single and doubles events. The course can be switched to make sure the paddlers get the best downwind conditions for the weekend making for great racing all round.

“The Pete Marlin is always so well run, CSA is proud to have such a strong paddling community in Border Canoe Club host the champs.”

With the likes of Kenny Rice, McGregor, Matt Bouman, Nick Notten as well as Jasper and Dawid Mocké at the top end fighting it out the race will be a humdinger. The East London locals like Jordy Malherbe, the Fenn brothers Matthew and Joshua will all use their home ground advantage to put the top contenders under pressure.

In the ladies race Nixon will be the lady to beat however there will be a tough competition from the likes of Bridgitte Hartley, Jenna Ward and East London locals Nikki Birkett and Zara Wood.

“South Africa is a leading surfski nation with our paddlers dominating the world stage.

“The competition is going to be mind blowing with all of these athlete, men and ladies, pushing for national titles.

“Let the weather gods be kind with some wind and good luck to all these taking part from Canoeing South Africa Surfski Committee,” Lewin added.