Jasper Mocké hit a triple jackpot in Durban on Saturday afternoon, winning a thrilling dice with Hank McGregor to win the FNB Durban Downwind, and with it he took the SA Single Surfski crown as well as a place in the national team to the ICF Surfski World Champs in Hong Kong later in the year.

The Capetonian rounded off a tactically astute race that saw him opt for a deep water line with his older brother Dawid and Kenny Rice, while McGregor led the local charge closer inshore, hoping to set a straight line course in the steady North Easterly wind.

McGregor floundered in the surf coming in and had to beach earlier than expected and run to the finish line along the beach while Mocké (Euro Steel/Mocké Paddling) nailed the line in and carefully picked his way through the tricky surf at the finish. 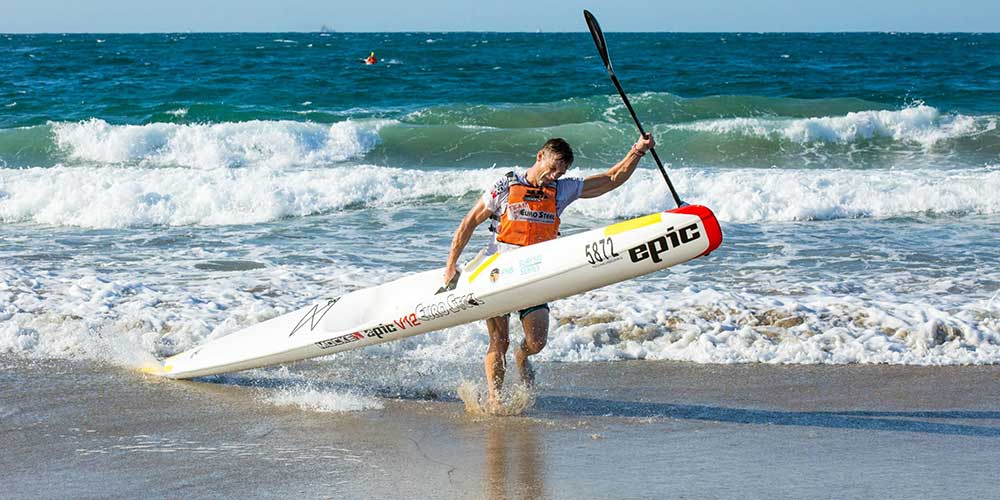 McGregor (Euro Steel/Epic Kayaks) cantered home in second and sealed the other senior men’s slot in the World Champs team, with Dawid Mocké rounding out the podium with an end sprint with Kenny Rice.

“It is such an honour to win the national title against a field like this,” said Jasper Mocké at the finish.

“A week ago when we knew it was going to be an East my brother and I decided that we would go deep, and when we get into a zone racing each other I know we are going fast. I never even thought about the guys on the inside.”

“With about ten kays to go, off Moses Mabhida, I was feeling good, and I decided to set my sights on Addington. I felt that the runs were lining up where I wanted to go and I could surf right into the finish,” he said.

Mocké added that he hadn’t been aware of where defending champ Hank McGregor was until the dying minutes of the race.

“About two kays to go I saw that red cap pop up and I knew I had to race my buddy to the finish. I was happy where I was. I could see Hank running with his ski on the beach and that’s just awkward,” he added.

The women’s title race proved to be just as enthralling as Michelle Burn (Fenn Kayaks) needed all her accumulated downwind experience to stave off the challenge from the reigning Surfski World Series champ Hayley Nixon (Euro Steel/Carbonology), with Nikki Russell completing the women’s podium.

“Just after Umhlanga I decided to go deeper, so I waited for Hayley (Nixon) and Nikki (Russell) to go past and I went out to sea. I did notice that Hayley decided to follow me.” 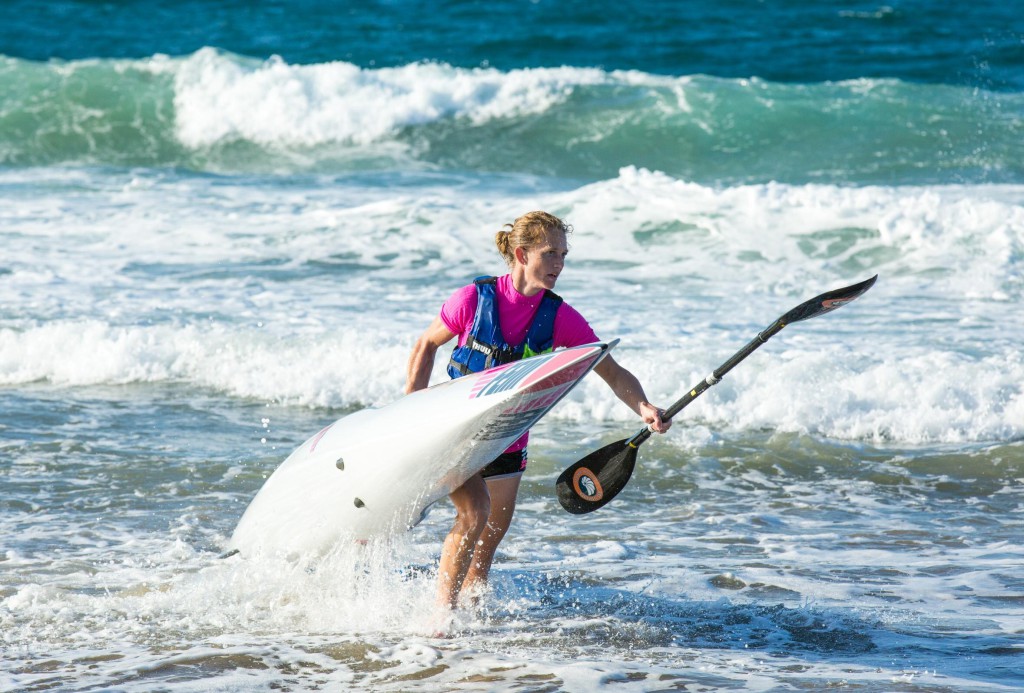 “About six kays from the finish I started to feel tired, but I just put my head down and tried to milk the last few runs into the finish. I wasn’t actually sure that I had won it when I got to the beach,” she added.

The race started with a backline start at La Mercy, where the huge surf made life very difficult for the paddlers trying to get out to the start line.

Nineteen paddlers were forced to withdraw, most of them after breaking their skis in the crunching backline break, including the pedigree likes of Dusi champ Andy Birkett.

Jenna Ward was another casualty of the angry surf, dubbed “No Mercy” by Hank McGregor. Her new ski was damaged and she was forced to swim it ashore. After repairing it with duct tape she got a fellow male paddler to paddle it out through the surf while she took a ride in a rubber duck and rejoined the rest of the field for the deep water start.

“Congratulations to all the paddlers for displaying breathtaking and adrenaline packed performances and the supporters who made the event even more electrifying,” he added.

Many of the elite paddlers will now turn their attention to international events in Mauritius, Portugal, Canada and the USA in the coming weeks, while the local seasons shifts to the popular Open Ocean Surfski Challenge series based at Durban Underwater Club, starting on 9 July.