The upcoming gsport Awards has announced their nominees with a plethora of South Africa’s female paddling stars in line for an award with Hayley Nixon leading the charge with the nomination for Athlete of the Year. 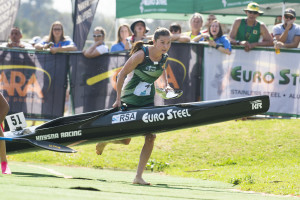 Euro Steel/Carbonology’s Nixon had a highly impressive 2017 with the surfski star making the shift to flatwater marathon racing where she teamed up with Michelle Burn to finish in fifth at the ICF Canoe Marathon World Championships in Pietermaritzburg.

Following Nixon into the nominations is Christie Mackenzie. The Under 23 paddler provided one of the moments of the 2017 ICF Canoe Marathon World Championships when she claimed bronze in the Junior Girls K1 race.

Euro Steel’s Mackenzie has been nominated in the Emerging Star of the Year category and her list of accomplishments is starting to grow into an impressive resume.

In 2017, Mackenzie paddled to second in the women’s race at the FNB Dusi Canoe Marathon and then in 2018 she followed that up with a second place with Bridgitte Hartley in the K2 race earlier this year.

There has also been a nomination in the Team of the Year category for the ladies contingent that took part in the ICF Ocean Racing Championships in Hong Kong last year.

In the women’s category at the event South Africa accounted for both the women’s and the junior girls world champions with Nixon and Sabina Lawrie winning the titles.

Of the nine medals that were on offer for the ladies, South African paddlers won five of them.

Outside of the medals, Bridgitte Hartley finished in fourth while Nikki Birkett (nee Russell) came home in sixth and Jenna Ward ended in eighth.

There will be three ladies representing South Africa in the island paradise with Nixon, Hartley and Purchase the three women fighting it out with the best in the world for the title.

There will be a handful of the nation’s best male paddlers in Mauritius too this weekend with Hank McGregor leading the charge.

He is joined by David Mocké, Matt Bouman and Barry Lewin.

The race to look out for in the men’s showdown will be the tussle between Euro Steel/Fenn Kayaks’ McGregor and his Australian counterpart Corey Hill.

Hill nudged McGregor out of the gold medal spot at the World Championships in 2017 and the most decorated paddler in South African padding will be eyeing a win over his competition from Down Under.