McGregor and Hartley star on opening day of marathon champs

Muldersdrift – Eleven times world champion Hank McGregor added a rare first to his lengthy CV when he won his first short course marathon title by holding off a valiant Nick Notten to claim the senior men’s gold medal at Cradle Moon Lake outside Johannesburg, while Bridgitte Hartley wrapped up the women’s equivalent in peerless fashion. 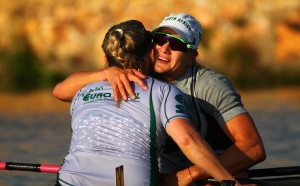 McGregor was pushed hard by Notten, now racing as senior after a successful Under 23 career, over the tight three lap shootout, with Under 23 rising star Stew Little taking the last step on the podium. Reigning K1 world champ Andy Birkett opted out of the race as he is battling to recover from a heavy dose of flu.

Hartley broke away before the first of the two portages in the women’s race and ground away from Jenna Ward and Nikki Birkett relentlessly. Birkett, also crippled by flu, was forced to quit halfway, leaving the door open for Ward to bag the silver and giving a delighted Melissa van Rooyen a shot at the podium.

Earlier in the day Hamish Lovemore proved that he is on track for a solid assault on the Under 23 Men’s podium at the marathon world champs in Shaoxing when he won a thriller of a duel in the first race of the day to down the tenacious Alex Masina, with Stew Little fully deserving the last place on the podium.

The win was satisfying the Lovemore as it erases the nightmare of the incident-fraught race at the KZN Marathon Champs a fortnight ago. He also bravely opted to change his boat set-up and came into the event using smaller and shorter paddles that he had never tested in the heat of battle.

Kyeta Purchase prevailed over Christie Mackenzie in the Under 23 women’s race to secure the KZN pair the seats on the plane to Shaoxing.

The programme was loaded with junior races, and the Boys Under 18 title race provided a thrilling contest for the crowd enjoying the spectator-friendly facilities at Cradle Moon Lake, as Hamish Mackenzie duelled with Uli Hart, Dave Evans and Matt Fenn over the seven laps and five portages of the race.

Fenn was an early casualty of the fierce pace, often driven by the charging Hart, and three boats came into the end-sprint with Mackenzie playing his cards tactically brilliantly to get to line just ahead of Hart and Evans. 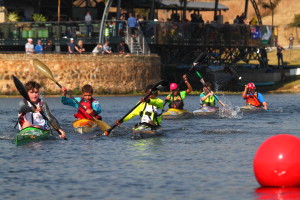 The full programme of Under 14 races and Guppy races for Under 12 and under 10 paddlers was supplemented by mixed doubles marathon races, designed to take full advantage of the long weekend to spread the programme over three days.

Sunday’s racing programme will build to the senior men’s and women’s K1 races at 2pm which will be streamed live via Canoeing South Africa’s website and Facebook page. 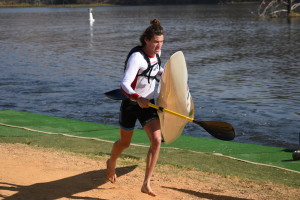