World champions Hank McGregor and Andy Birkett hung on to retain their national K2 marathon canoeing crown under massive pressure from the unheralded young crew of Louis Hattingh and Alex Masina, while Bridgitte Hartley and Christie Mackenzie had to fight equally hard to deny the charging Jenna Ward and Kyeta Purchase in the women’s race.

Both marathon races ended in thrilling end-sprints at Cradle Moon Lake, with McGregor and Birkett edging across the line less than two hundredths of a second ahead of the young Pietermaritzburg duo of Hattingh and Masina.

The men’s K2 race was turned on it’s head within the first half an hour when an attack on the first portage saw the eight boat bunch disrupted, leaving the fancied Cape crew of Stu MacLaren and Nicky Notten struggling and off the back of the bunch.

McGregor, who was steering the Euro Steel K2 in a reversal of the set-up that the world champs previously opted for, decided to make the break count and set a ferocious pace at the front that only Hattingh and Masina could match.

“That was not the plan we discussed before the race,” said an exhausted Birkett. “Hank decided to up the pace after that portage, even though we were twenty kilometers out, and the pace stayed like that all the way to the finish.”

“We were trying to burn off all the other threats in the race,” said McGregor. “We burnt a lot of matches but we went well together, considering we haven’t been able to train together.”

The close-run silver medal was suitable reward for Hattingh and Masina who in the process clinched the second senior K2 berth to the ICF Canoe Marathon World Championships in Shaoxing in China in October.

Hattingh bounced back from illness that dogged his Under 23 K1 race to post a remarkable performance with Masina, despite the fact that the Camps Drift training mates have hardly trained together.

“Believe it or not that was only the third time we have paddled together,” confessed Hattingh. “We did a dice and then a portage session, then today’s race!”

Masina, who medalled as a youngster at the 2017 World Champs in Pietermaritzburg, also had to shrug off illness to complete the remarkable result.

“With more time in the boat we can improve a lot more,” he added. 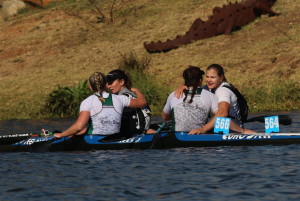 The women’s K2 title decider proved to be just as thrilling as Hartley and Mackenzie raced side-by-side with Ward and Purchase for virtually the entire race. They turned around the buoys for the final time with nothing separating the two crews.

Hartley turned to the sprinting pedigree with a hundred metres to go and provided a surge of power that catapulted their K2 across the finish line a full boat-length ahead of Ward and Purchase.

In both cases the two crews contesting the line honours came into the sprint finish secure in the knowledge that they had done enough to secure the places in the national teams to China in October.

The luckless Stu MacLaren and his Cape partner Nicky Notten had to settle for the last step on the podium while their Cape team mates Bianca Beavitt and Melanie van Niekerk were a distant thirds in the women’s race.