Clint Cook and Hamish Lovemore won the men’s K2 title in the final event of the SA Marathon Championships on Saturday, completing a clean sweep of gold medals for Lovemore.

After easily winning the Under 23 K1 gold on Thursday, Lovemore repeated his giant-killing performance in Cape Town last year by winning the senior K1 title, and then added the senior K2 gold with Cook to complete the rare hat-trick feat.

Lovemore and Cook, who was celebrating his birthday, had the power to edge clear of the 2016 world champion K2 crew of Hank McGregor and Jasper Mocké in a thrilling end-sprint that appropriately brought down the curtain on three days of top class racing at the new marathon venue. Wayne Jacobs and Nicky Notten, who agreed to race together after Andy Birkett withdrew with an injury, completed the men’s podium, having spent the latter part of the men’s K2 race on their own after being dropped off the lead bunch.

“We tried to conserve as much as we could on the first two laps, trying to keep all our powder dry for the end,” said Lovemore.

“Hank (McGregor) and Jasper (Mocké) put us under some serious pressure on the first couple of laps, but after we survived that I said to Clint this would come down to the last lap.

“We wanted to get into that last portage first and lead to the end but they definitely tested us in that last five hundred metres,” he said.

“We have been doing plenty of sprint work so I am really, really happy to pull it off,” said the Euro Steel racer.

“Hats off to Clint and Hamish, they definitely had the top end over us at the finish,” conceded Hank McGregor.

“It was our first race together in five years, so we have something to work on in the months ahead,” he added. 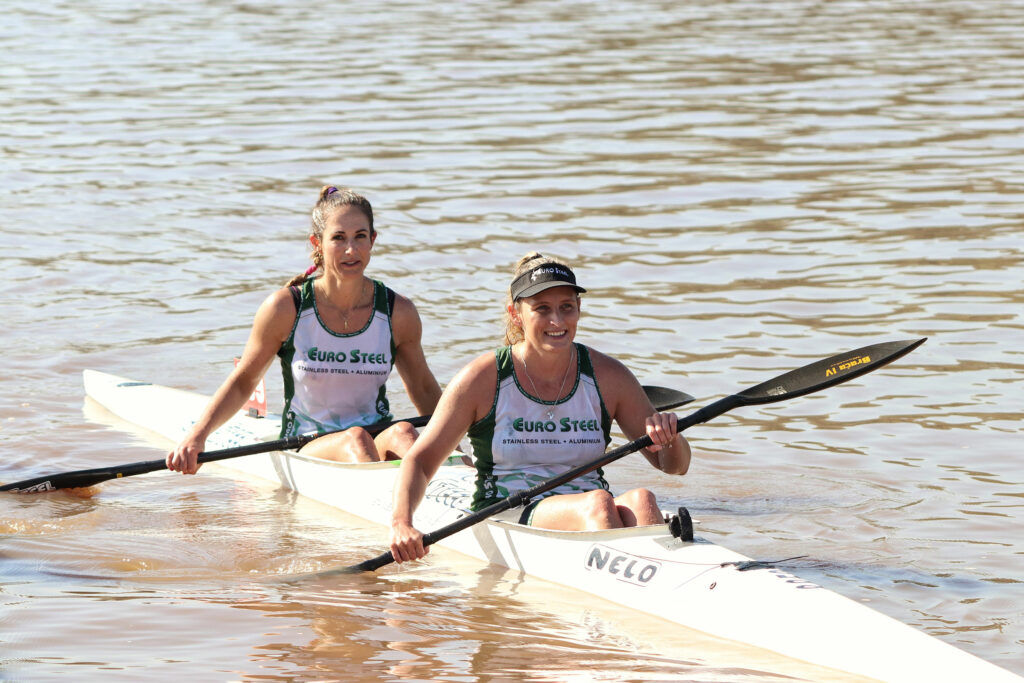 “The first few laps were really tough with lots of intervals, but eventually it came down to the two boats at the front,” she added.

Ward said that the pressure from Smith and Wilson had made the race challenging.

“Jenna is an absolute master at the marathon event, so it was a privilege to paddle behind her,” said McGregor. “It was tough racing against our training squad members Tannah (Smith) and Jade (Wilson). They are very tenacious.”